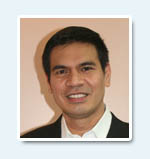 Arnel is a graduate of Bachelor of Science in Accountancy at Adamson University in Manila. He has held vital positions in a five star hotel for many years. He tried his luck in the networking business in 1998 as an independent distributor and Senior Manager of a well-known multi-level marketing company for 7 years. He has attended two Professional Enhancement Seminars in Vancouver, British Colombia in 2001 and San Francisco, California in 2002. He was able to create 30 active Managers under his organization. On 2006, he became a Training Director of another famous networking company in the Philippines for a year until he set his foot in Alliance In Motion Global, Inc. in 2007. His broad experience in conducting training seminars and teaching our distributors the principles of networking contributes in the company’s fast and enormous marketing coverage.

Retrieved from "https://aimglobalinc.fandom.com/wiki/Mr._Arnel_Limpin?oldid=3307"
Community content is available under CC-BY-SA unless otherwise noted.