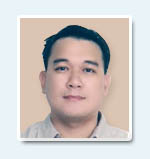 Jun is a graduate of Bachelor of Science in Business Administration, Major in Management at the National College of Business and Arts. He worked as a Store Operations Manager in Fast Food restaurants in the Philippines, Saudi Arabia and Kuwait; in a local Entertainment group; and in a local telecom company. For his career advancement, Mr. Espinosa has attended various trainings and seminars wherein his outstanding performance was recognized. In 2003, he ventured into the networking business. He joined as an independent distributor and eventually became a Manager and Sales Trainer. He also qualified in the President’s Club, Car Incentive, and Travel Incentives. His broad experience and excellence in the retail and networking industry has made him an icon in the world of multi-level marketing business.

Retrieved from "https://aimglobalinc.fandom.com/wiki/Mr._Jun_Espinosa?oldid=3298"
Community content is available under CC-BY-SA unless otherwise noted.